This month, I learned how to send a tweet with GitHub Copilot. It was so cool! I'm anticipating that you may wonder:

Fortunately, I'll answer all of those questions in this post!

Firstly, what is GitHub Copilot?

Copilot is an AI pair programmer that helps you write code faster with less work. If you have never used it and you're struggling to envision the behavior, I would liken it to the Smart Compose feature in Gmail and Google Docs. Similar to Smart Compose, GitHub Copilot anticipates your next line of code to boost your productivity. 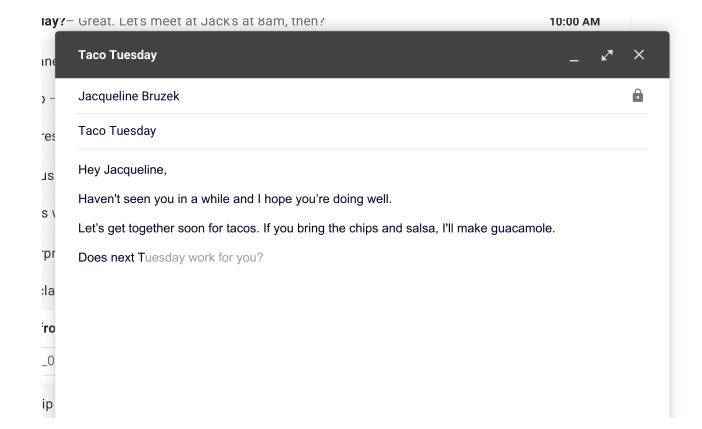 Why am I using GitHub Copilot to send tweets?

I'm a developer advocate, and part of my role is building demos to increase developer awareness of new features. In July, Twitter's DevRel team asked the GitHub DevRel team to collaborate on a stream showing Twitter API v2 and GitHub Copilot. The point of the stream is to show that GitHub Copilot can help you leverage Twitter's API v2. I excitedly agreed to do the stream, and then I realized I had to use Tweepy, an easy-to-use Python library for accessing the Twitter API. I had one huge, glaring problem: I don't know how to write in Python, so it's not easy for me to use. I'm a trained JavaScript developer. I can even find my way around a Java or C# codebase, but I never touched Python in my life. Everyone says Python is easy because it's easy to read, and that's the language they learned in school. However, I had less than one week to prepare and deliver the demo with strangers on the internet watching me.

Admittedly, in my role, I've signed up to demonstrate, discuss, or build with unfamiliar tools because I believe that leaving my comfort zone will help me to grow and learn new concepts quickly. I've used GitHub Copilot for multiple projects to help me complete quick projects. A few examples include: Demonstrating GitHub Copilot with Applitools. Building automation in my repositories. Just completing random short applications in less than a day.

GitHub Copilot is not something that replaces learning the intricacies of how to code because without knowing what you're doing, you're prone to inadvertently introducing bugs or poor practices. However, if you have an idea of what you want to accomplish and a solid understanding of the logic behind the lines of code you want to write, but you're not familiar with the syntax, Copilot can help.

I chose to send a tweet with Copilot because I'm addicted to Twitter, and I felt programmatically sending a tweet is more exciting than retrieving tweets via a GET request.

At face value, programmatically sending a tweet doesn't seem practical. One idea I had is that open source projects could automagically tweet Good First Issues whenever an issue is labeled 'good first issue.' The purpose is to attract new contributors and help new contributors find achievable issues. With the help of Copilot, I built out a solution for this using GitHub Actions, which I will write about in a future post.

What is the value in it for you?

If you're curious about how GitHub Copilot can work for you, I wrote about its various use cases here. For my short answer, it's fun, and you will learn how to optimize Copilot's features to boost your productivity.

Step 2: Create an App on the Twitter Developer Platform

This step will help you generate the necessary tokens and keys to access Twitter's API. Please note: this is not creating an application that exists on an app store. Instead, this refers to the "app" you're building to interact with APIs with Twitter's API. Save the consumer secret, consumer key, access token, and access token secret because we will use those credentials later in this tutorial. 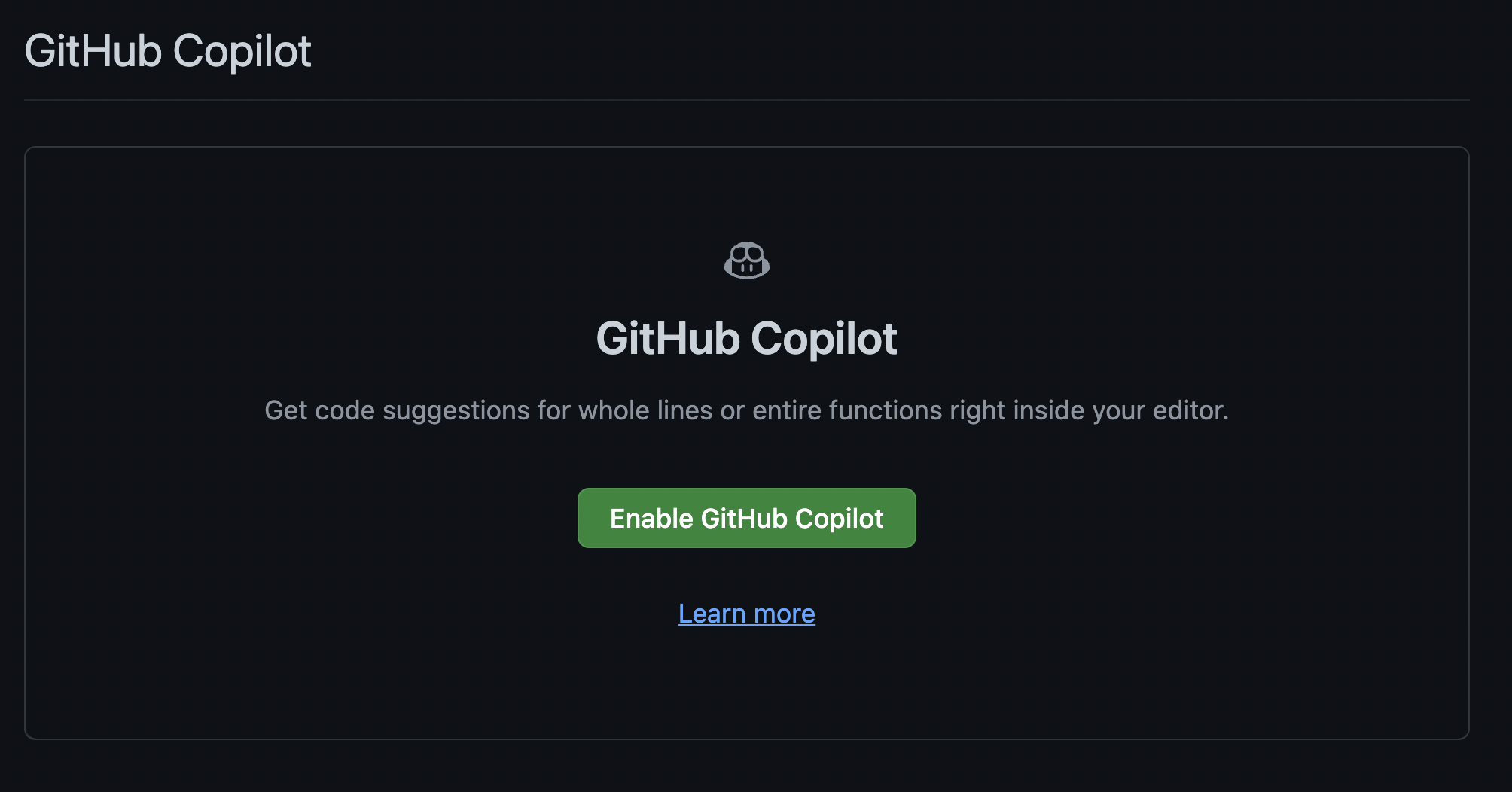 Step 4: Install the Copilot extension in your editor 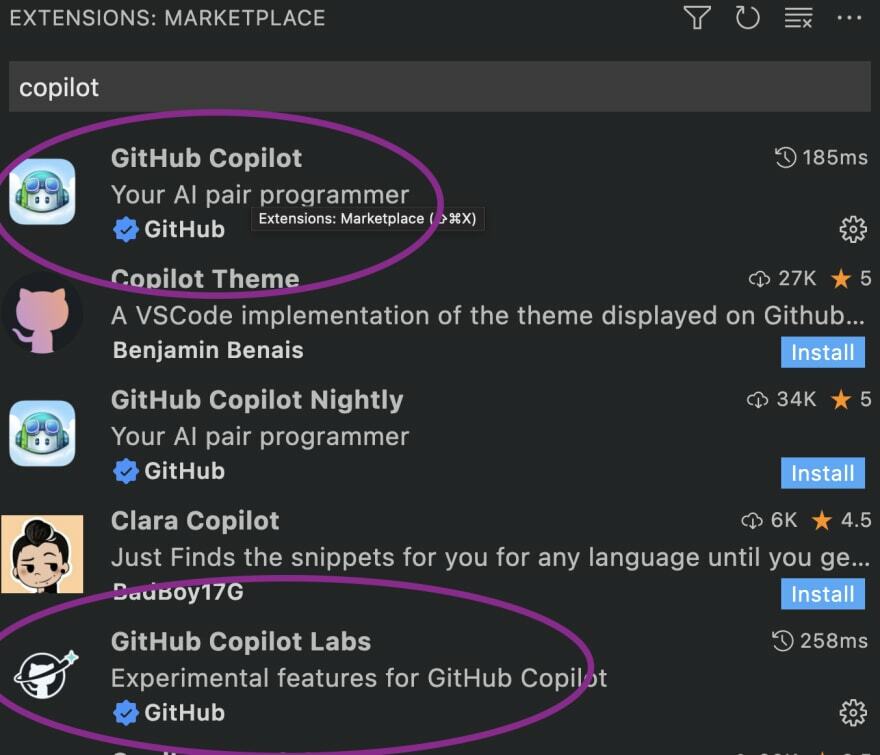 As I mentioned, tweepy is a Python library that makes it easy to use the Twitter API. Twitter seems to appreciate its existence because the Twitter DevRel team suggested I use that library. To get started with Tweepy,

I stored the file sendTweet.py in a new directory (aka folder) called copilot-tweepy. 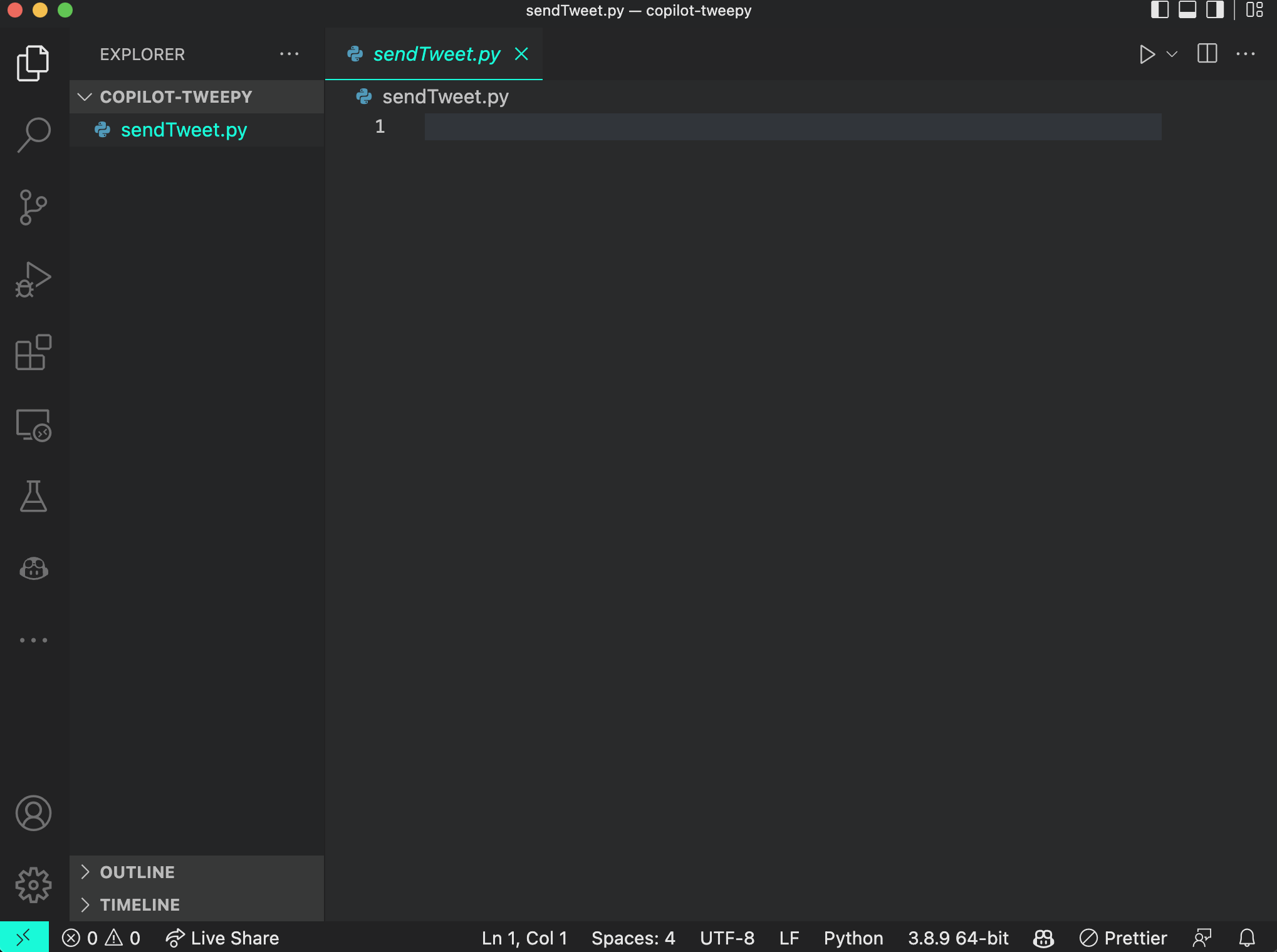 Step 7: Let’s use Copilot to import the tweepy library

This was helpful for me because I was unsure how you handle library imports in Python, and Copilot showed me how. In the screenshot below, it populates a line of code that says, 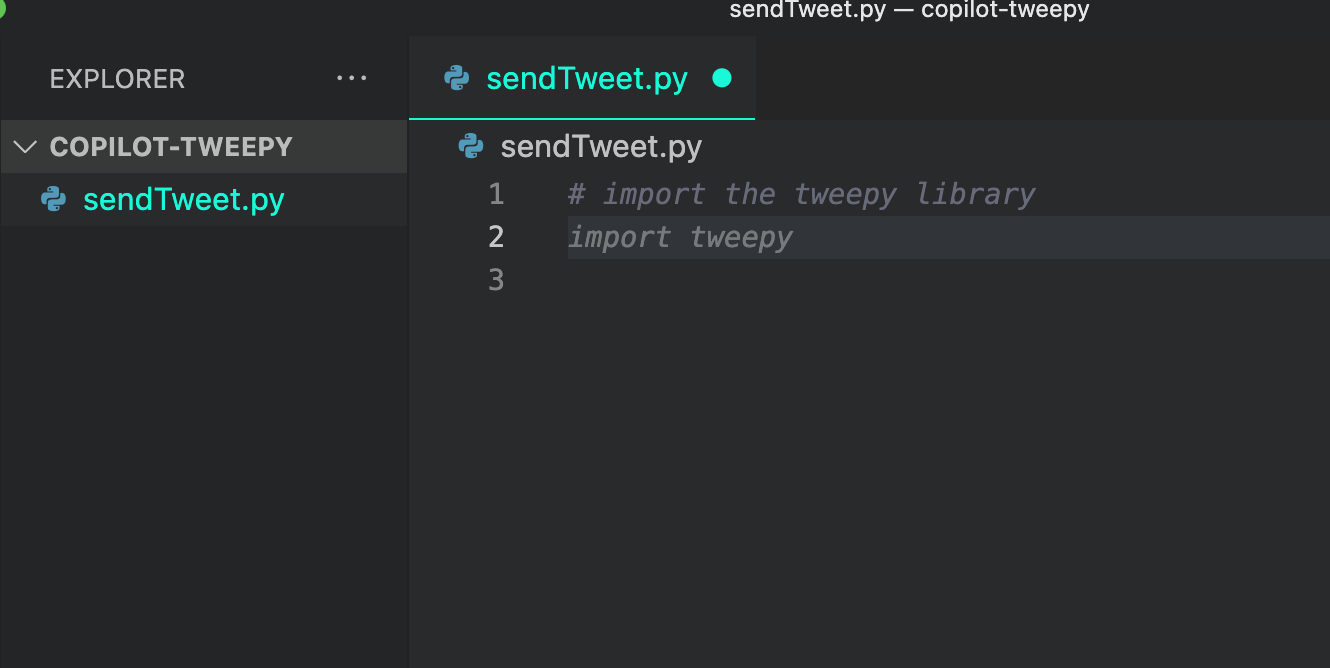 I wrote a comment so I could use the tweepy client and my API credentials, but Copilot didn't suggest the desired solution! Because the Twitter API v2 is still relatively new, it will not appear as the top suggestion.

The screenshot below shows Copilot making a suggestion that's inaccurate for my goals.

By default, Copilot will provide an initial suggestion, but you can see more of Copilot's suggestions by:

For this situation, I chose the 'Open GitHub Copilot' option to show multiple suggestions. It opened a new tab with 119 lines of suggestions. After reading a bit of the Twitter API documentation, I learned that tweepy.Client is the correct syntax for Twitter API v2, so I searched specifically for the keywords tweepy.Client. I found the solution I needed and accepted that solution. 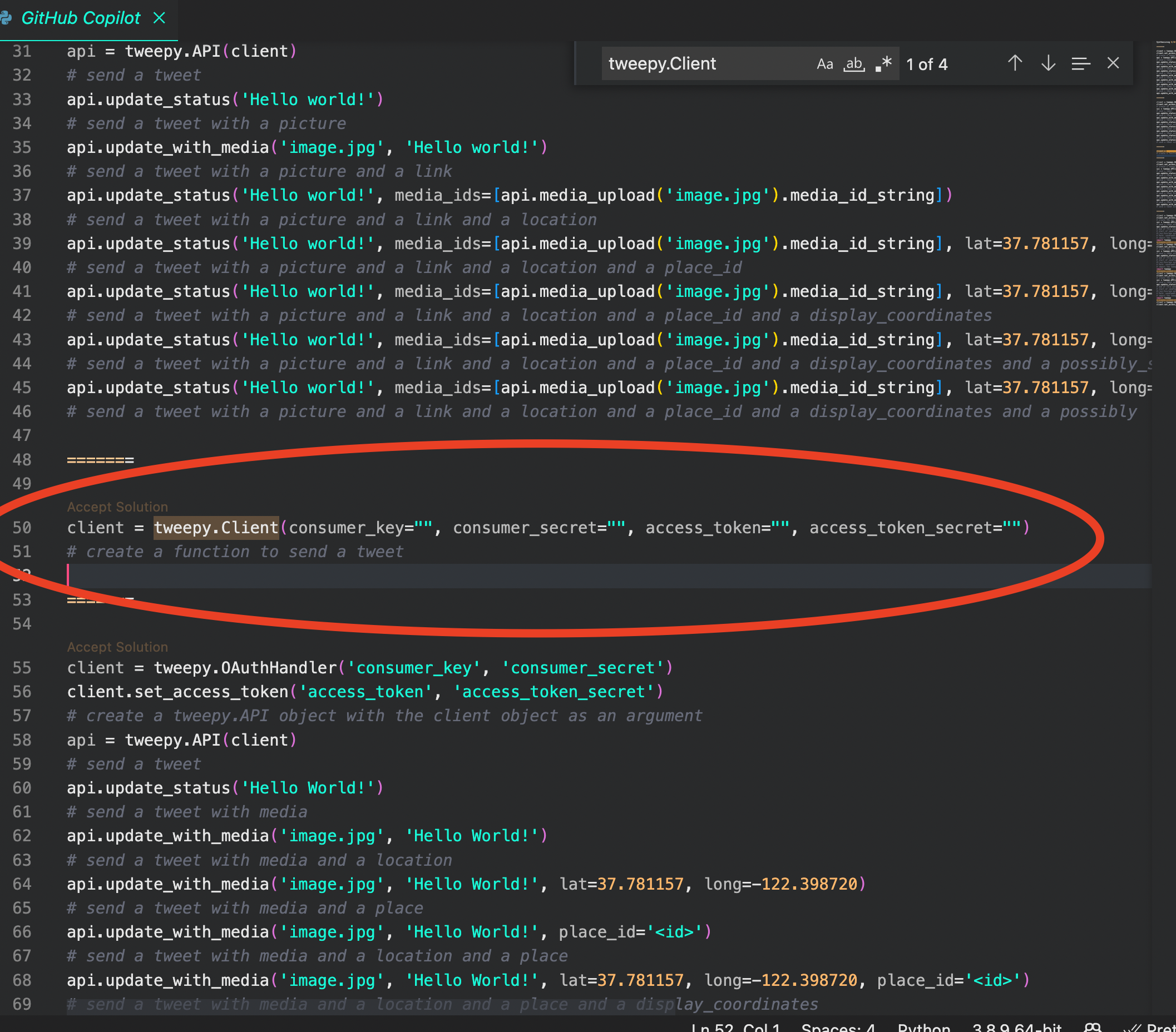 The suggestion that worked best for me was

Step 9: Create a configuration file to store your credentials

I created a file called config.py in the same directory as sendTweet.py. I used this file to avoid exposing API credentials to the public.

Step 10: Use Copilot to autocomplete the config file

I wrote these first few lines in my configuration file. 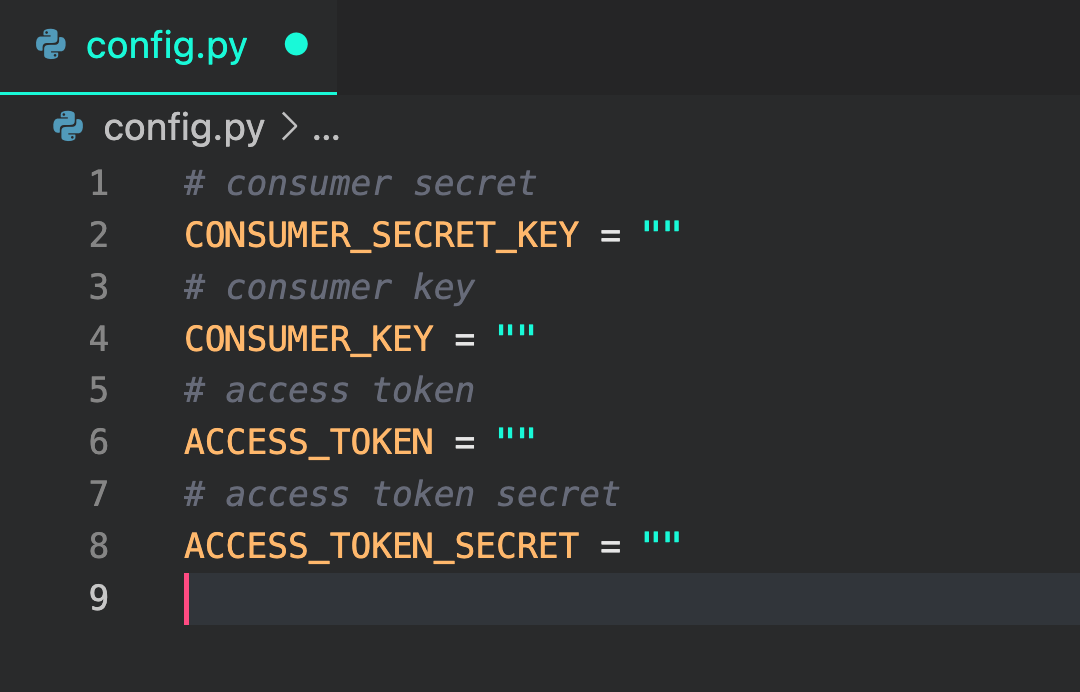 I passed in the correct values for each key.

Step 11: In the sendTweet.py file, import the configuration file with Copilot

I wrote a comment that said # import the config file and accepted Copilot's suggestion on the next line.

As you fill in each value, Copilot will notice the pattern and autofill the values for you!

Here’s what that block of code should look like when you’ve entered all the values:

Step 13: In the sendTweet.py file, write the contents of the tweet

Copilot correctly interpreted my comment, so I accepted the initial suggestion.

In this step, I had to write a very specific comment. I initially wrote a comment that said,

Unfortunately, Copilot spit out suggestions from Twitter API v1. To prompt Copilot to provide the desired suggestion, I wrote

This time Copilot gave me the correct results.

Step 15: Print the value of the response to sanity check.

Printing the response variable may help us learn if our tweet was successful or not and why.

Step 16: Confirm that both files have all the required lines of code

Both my files looked like the code snippets below:

In my terminal, I ran the commands: python3 sendTweet.py. To check that it was successful, I headed to my Twitter feed and found the tweet!

The key to getting the best results from Copilot is:

I hope you had fun experimenting with Copilot and the Twitter API v2! If this was successful for you, link your tweet in the comments below!