From code to art to essays, generative AI is all the rage in the developer community. I personally try to get caught up in every new tech trend. The industry moves fast, and it’s sometimes overwhelming, so I prefer to get an overview of the trend so that I understand how it works, but I don’t have to switch all my tooling every few months. However, GitHub Copilot and AI-generated art intrigue me so much. I can spend all day experimenting with tools like DALL-E and Hey, GitHub, a voice-activated AI pair programmer. I think generative AI shakes the core of our society. It may shift how we create art. It might transform how artists approach their creative process. Similarly, GitHub Copilot and other AI pair programmers evolved my development process. It’s helped me think outside the box as a developer.

The demo was so awesome! Now, I had a mission: to learn how to generate AI art in Codespaces. Unfortunately, this is in private preview, so folks have to request access to do this. Luckily, I work at GitHub (hehe 😅🤪). I used GitHub Codespaces to generate the following images: 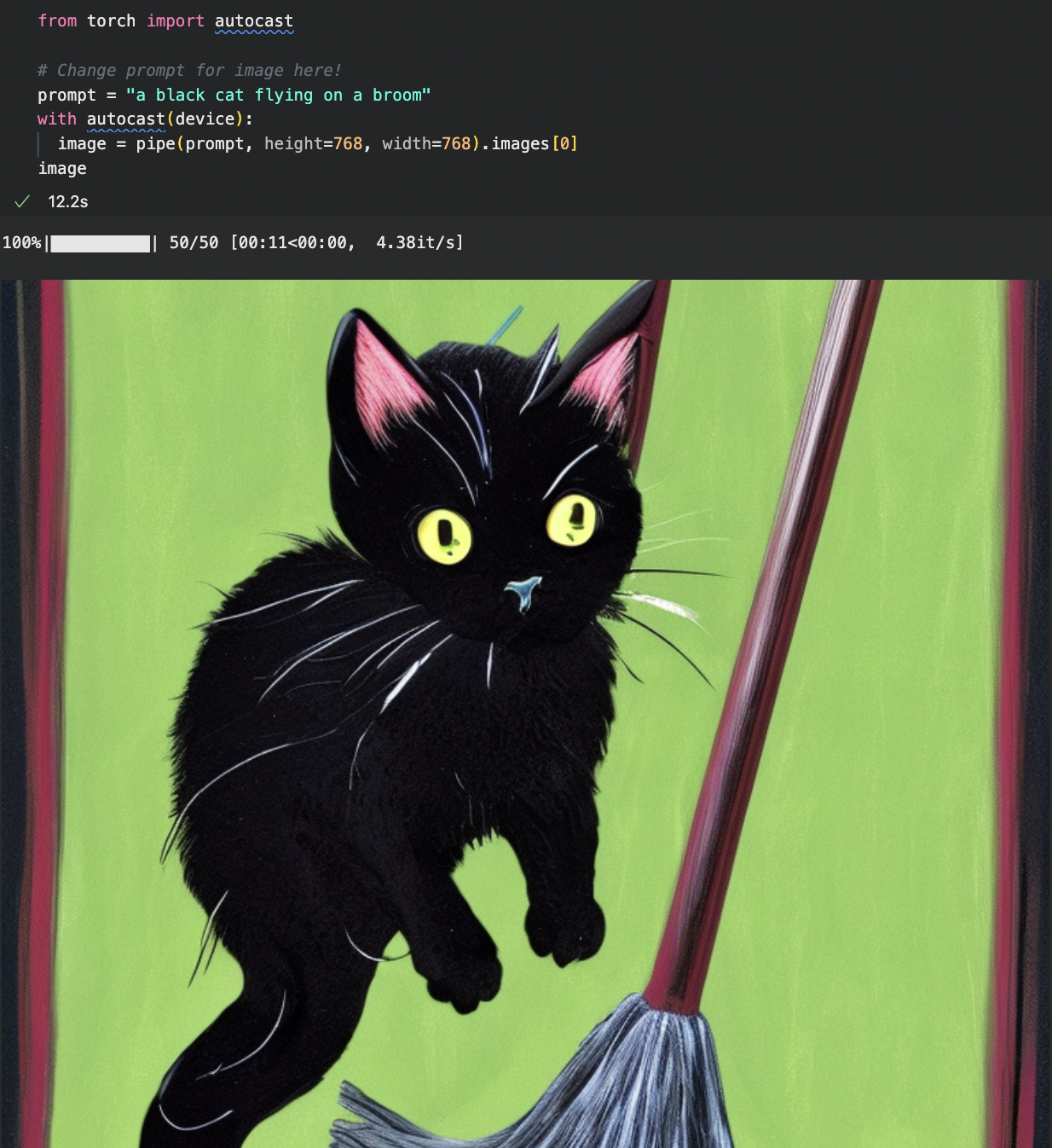 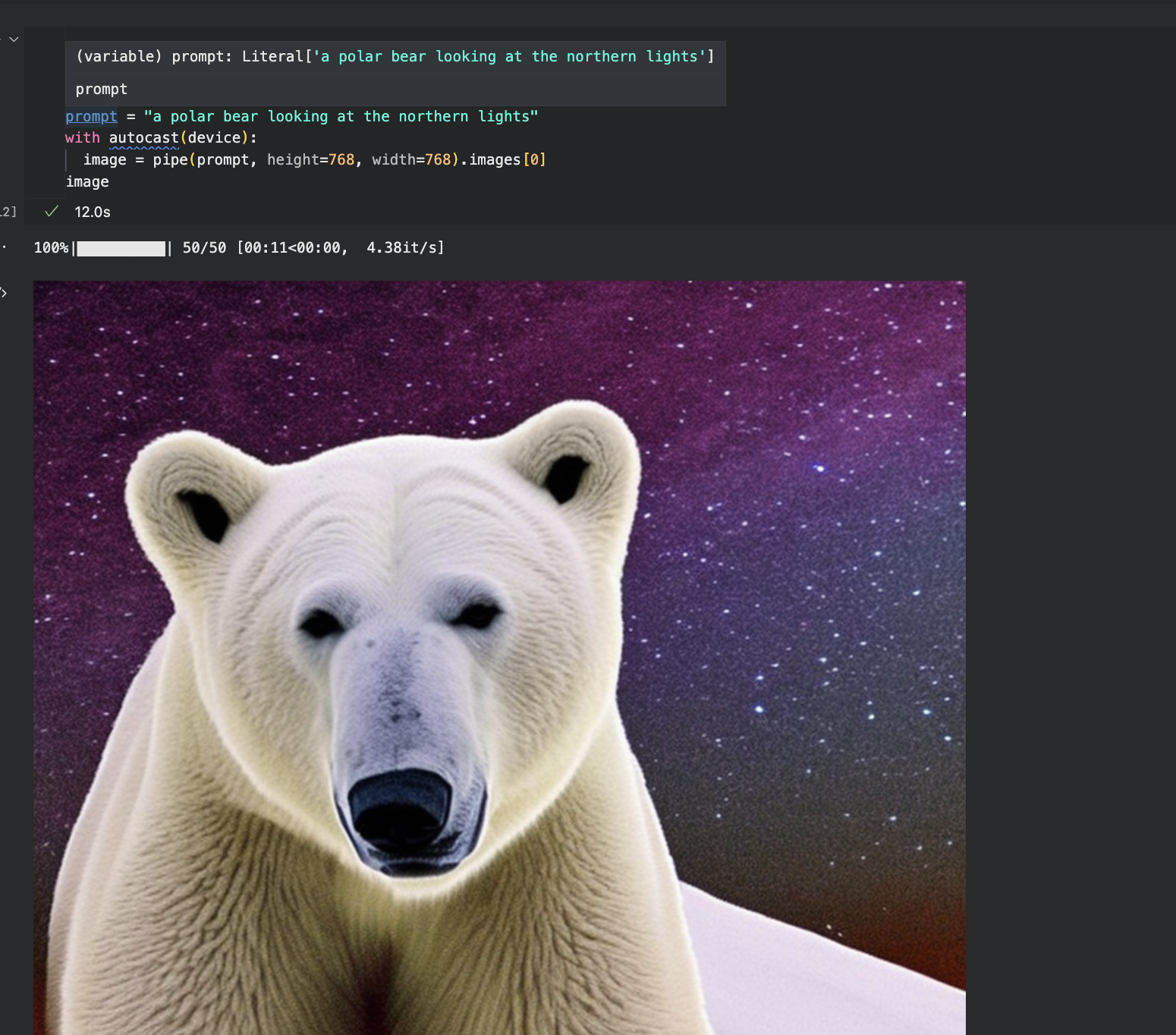 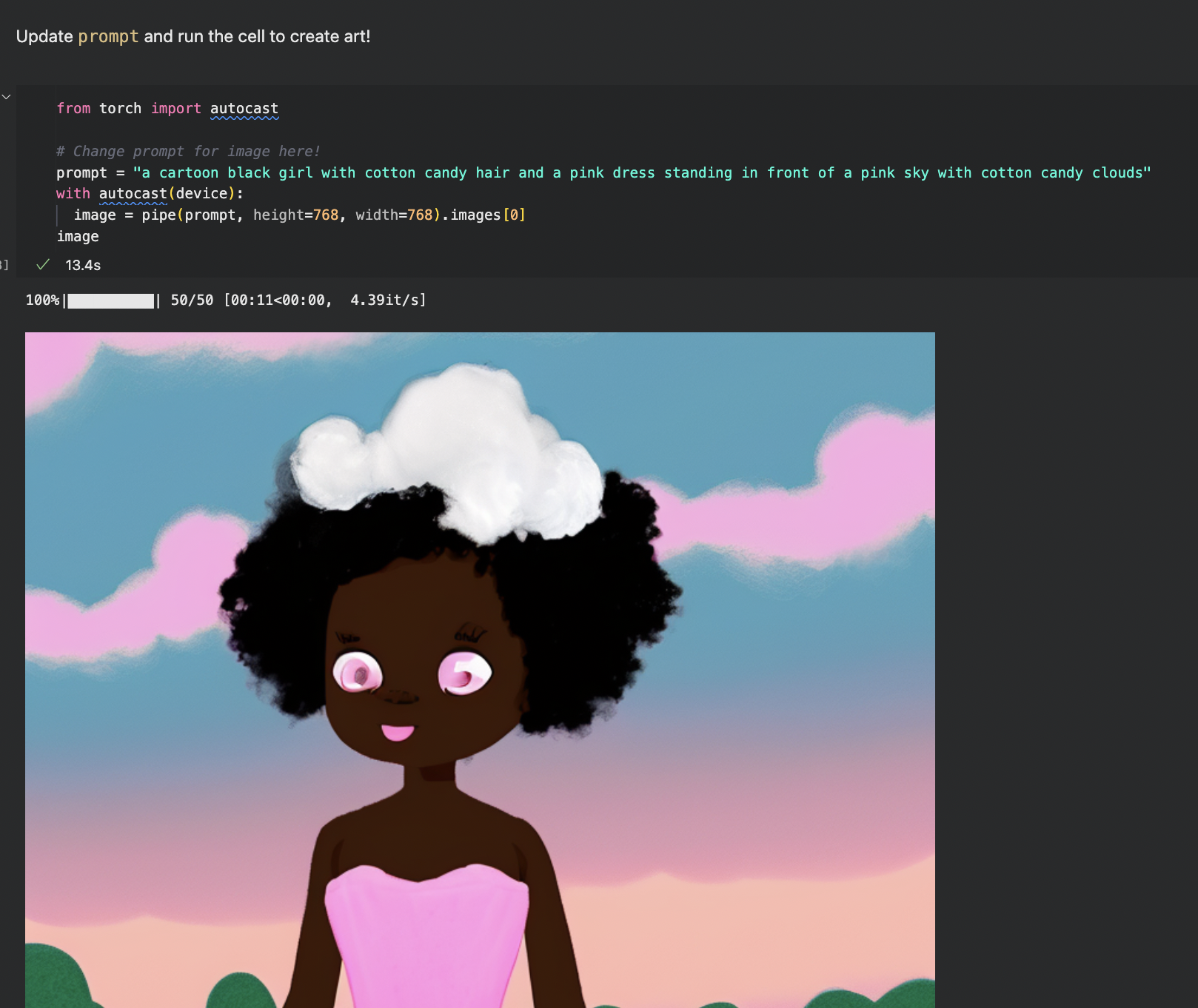 In this blog post, I will share the steps to generating AI art in GitHub Codespaces so that you can do it too.

What is GitHub Codespaces?

What is GPU and when would you need GPU-Powered Codespaces

GPU is an acronym that stands for Graphics Processing Unit. While a CPU (Central Processing Unit) is the brain of the computer, the GPU processes graphics. All computing devices, such as iPads and laptops, need CPUs. GPUs were originally designed to display 3D graphics at a faster pace. Today, GPUs have evolved, and their ability to process data simultaneously and quickly makes them beneficial for gaming, video editing, bitcoin mining, and machine learning.

Sometimes, CPUs aren’t efficient for machine learning. If the task is data-intense, training your neural network may take longer. To solve this problem, engineers may purchase GPUs with a large amount of memory. We released GPU-powered Codespaces to make training and and developing in deep learning environments seamless for machine learning engineers.

What is Stable Diffusion?

How to Generate AI Art in Codespaces

What you will need

This will open up a Codespace with a few Notebook files. We will use this environment to generate our AI art. 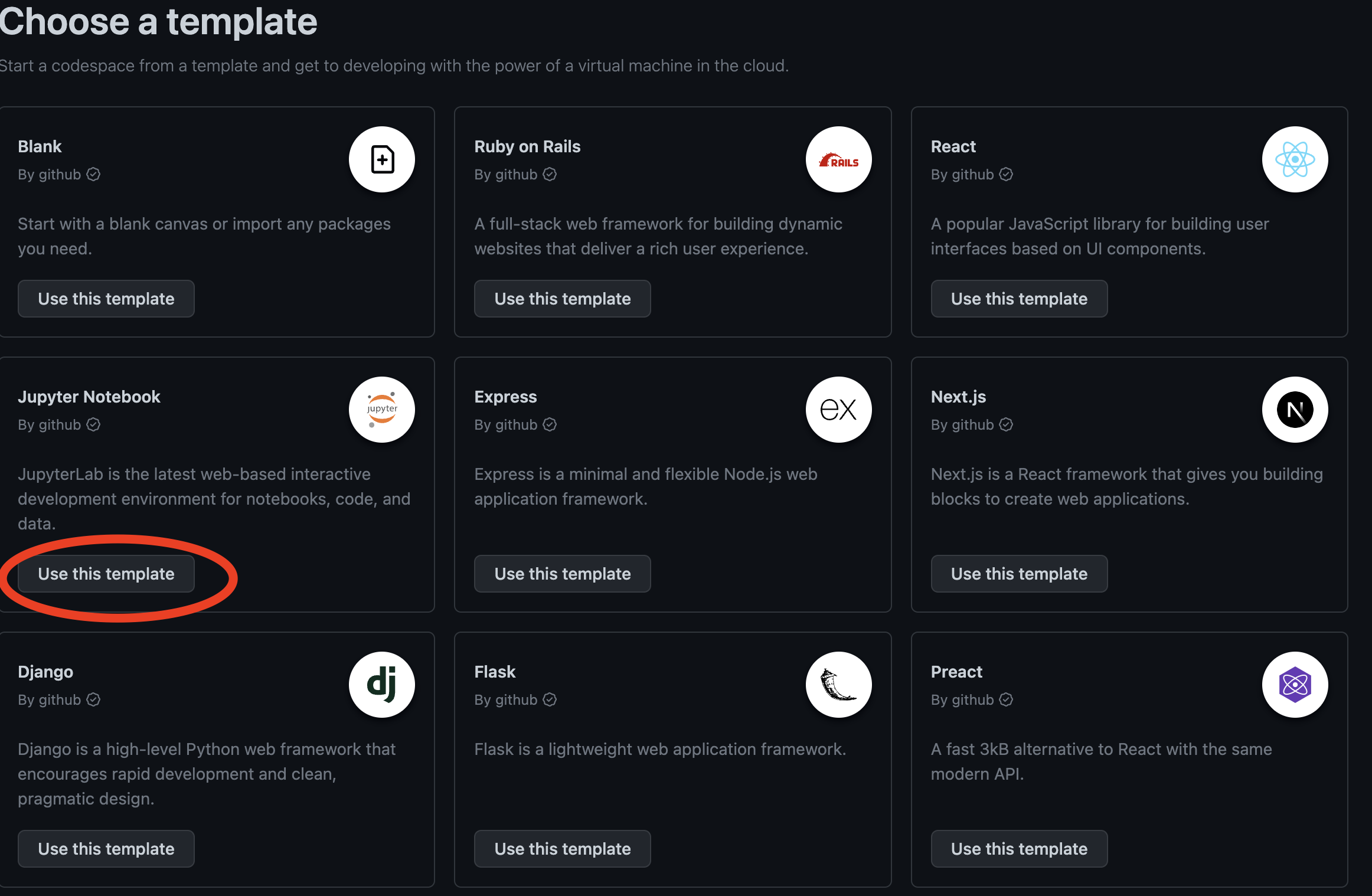 Step 2: Commit the files to a new repository

I did this step because I needed to make a few configurations to this environment on the repository level. For example, I need to add a GitHub Codespace secret, and I need to open this Codespace up in GPU. I started with this template because I’m not a data scientist or machine learning engineer, and I don’t use Jupyter Notebook regularly. Using this template allows me to not worry about how to set up a Jupyter Notebook.

Sidenote: I’ve started using the Source Control GUI in Codespaces instead of the command line. At first, I was opposed to it because I’m familiar with version control via the command, but the GUI is really convenient. If you’re interested in using that path, check the image below: 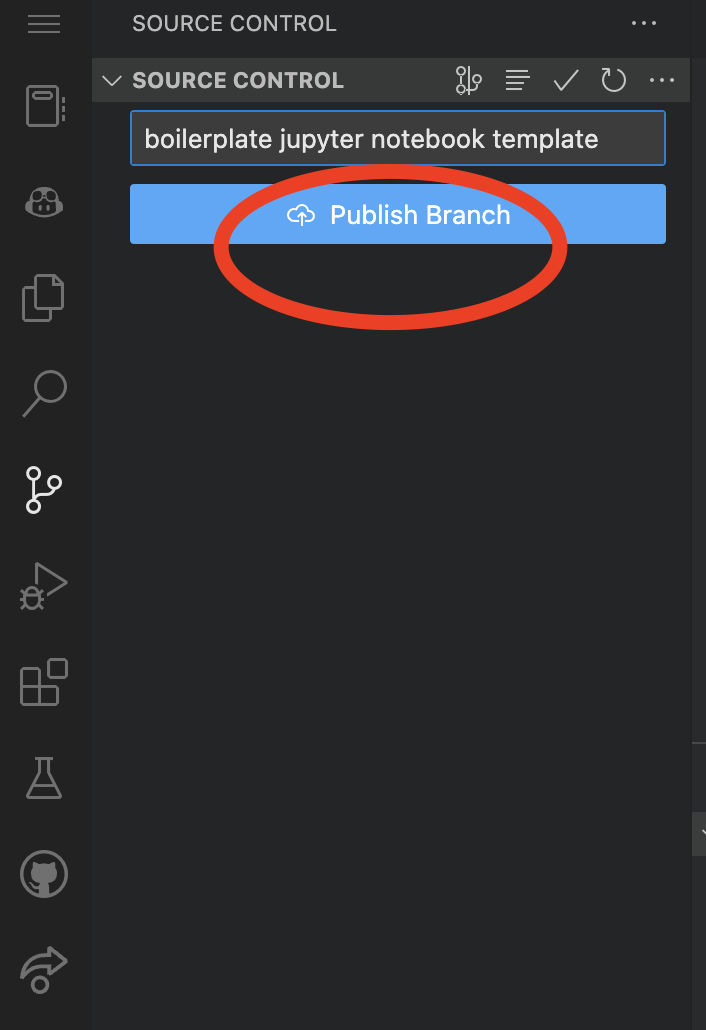 In this image above, I click the source control button, I type a commit message, and then I press ‘Publish Branch.’

You may have to sign up for a Hugging Face account, which is completely free. Hugging Face is a community for folks who are interested in artificial intelligence, open source, and open science. Once you sign up and verify your account, you should be able to generate an API token at https://huggingface.co/settings/tokens

I navigated to my repository titled “codespaces-jupyter.” This is the generic name given by the Codespace template. In the repository, I navigate to my Settings tab > Secrets and variables > Codespaces.

In the Codespaces secrets store, I named my secret HUGGING_FACE_TOKEN and added the API token from Hugging Face as my secret.

Once saved, it should look like the image below: 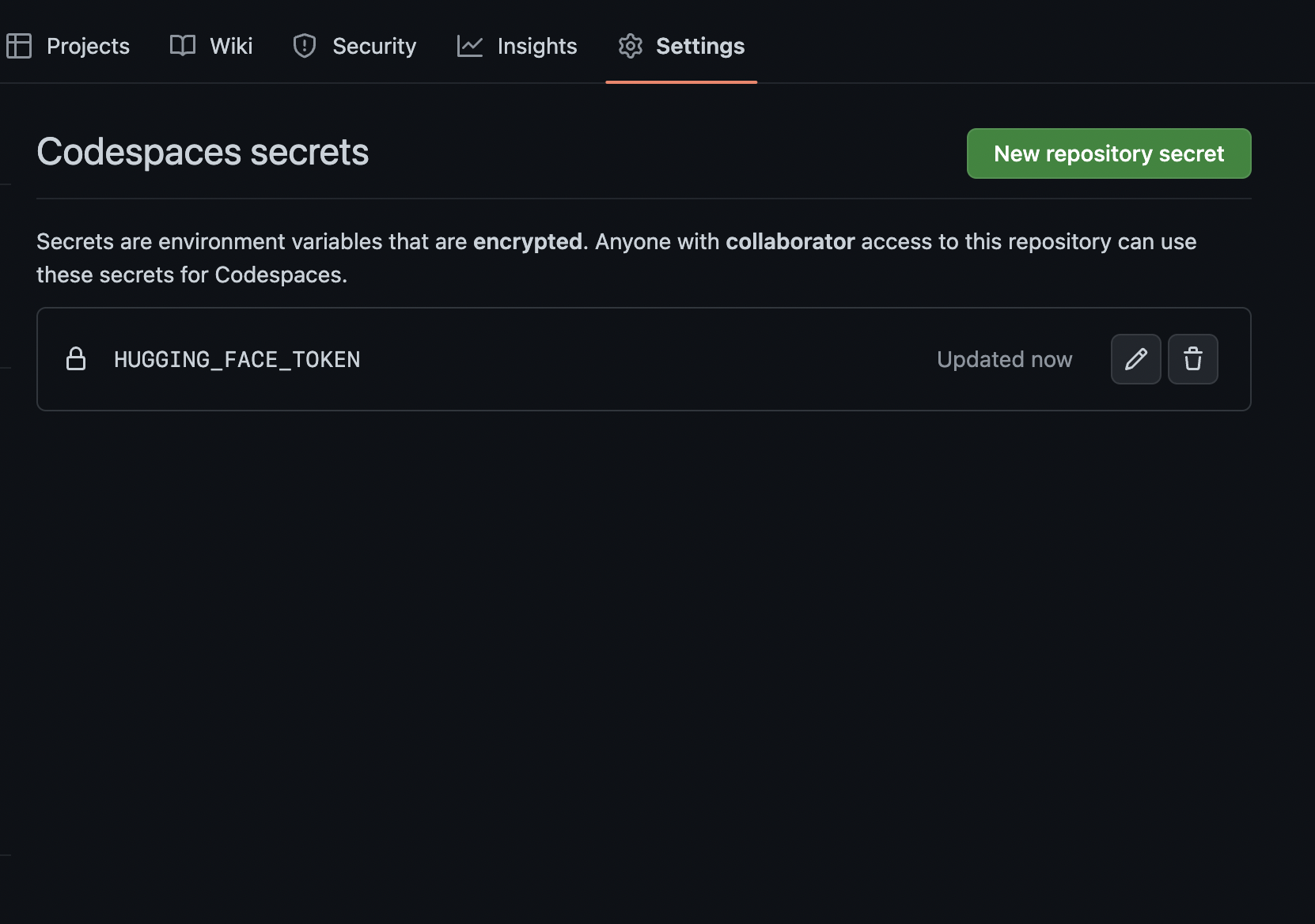 Step 5: Open your repository in a GPU-Powered Codespace

Click the Code button in your repository. You should see two options – one for ‘Local’ and another for ‘Codespaces.’ Press the three dots under Codespaces to see the label ‘New with Options.’ This allows you to choose the machine type.

Choose the machine type 6 core, 1 GPU. If you want to update the branch, region, and dev container configuration, you can, but I suggest using the defaults. 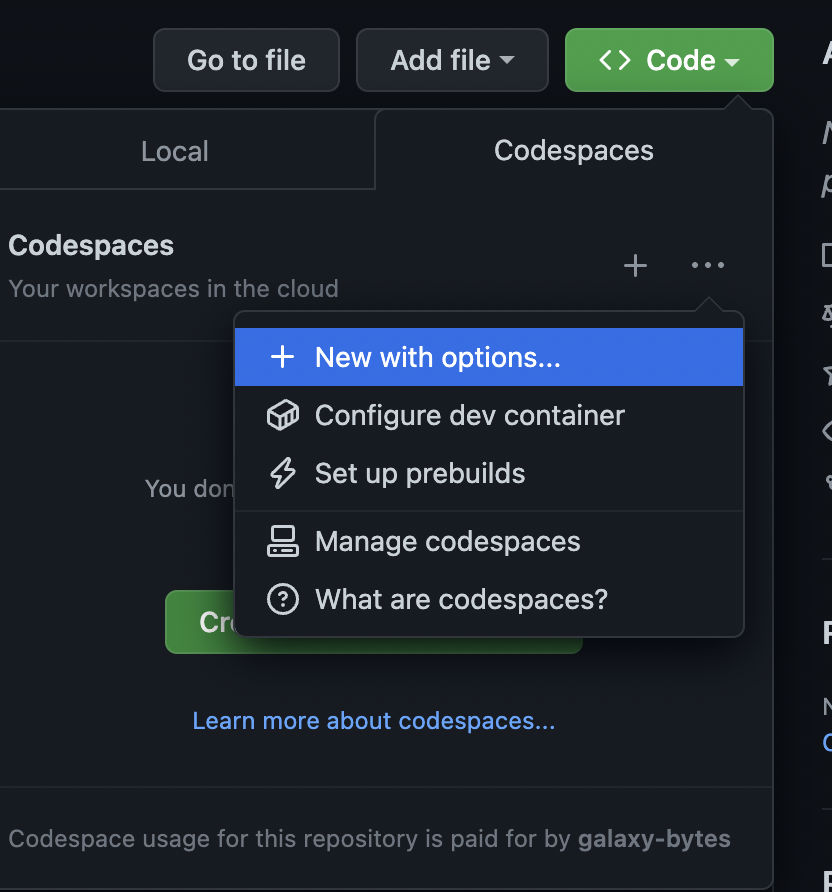 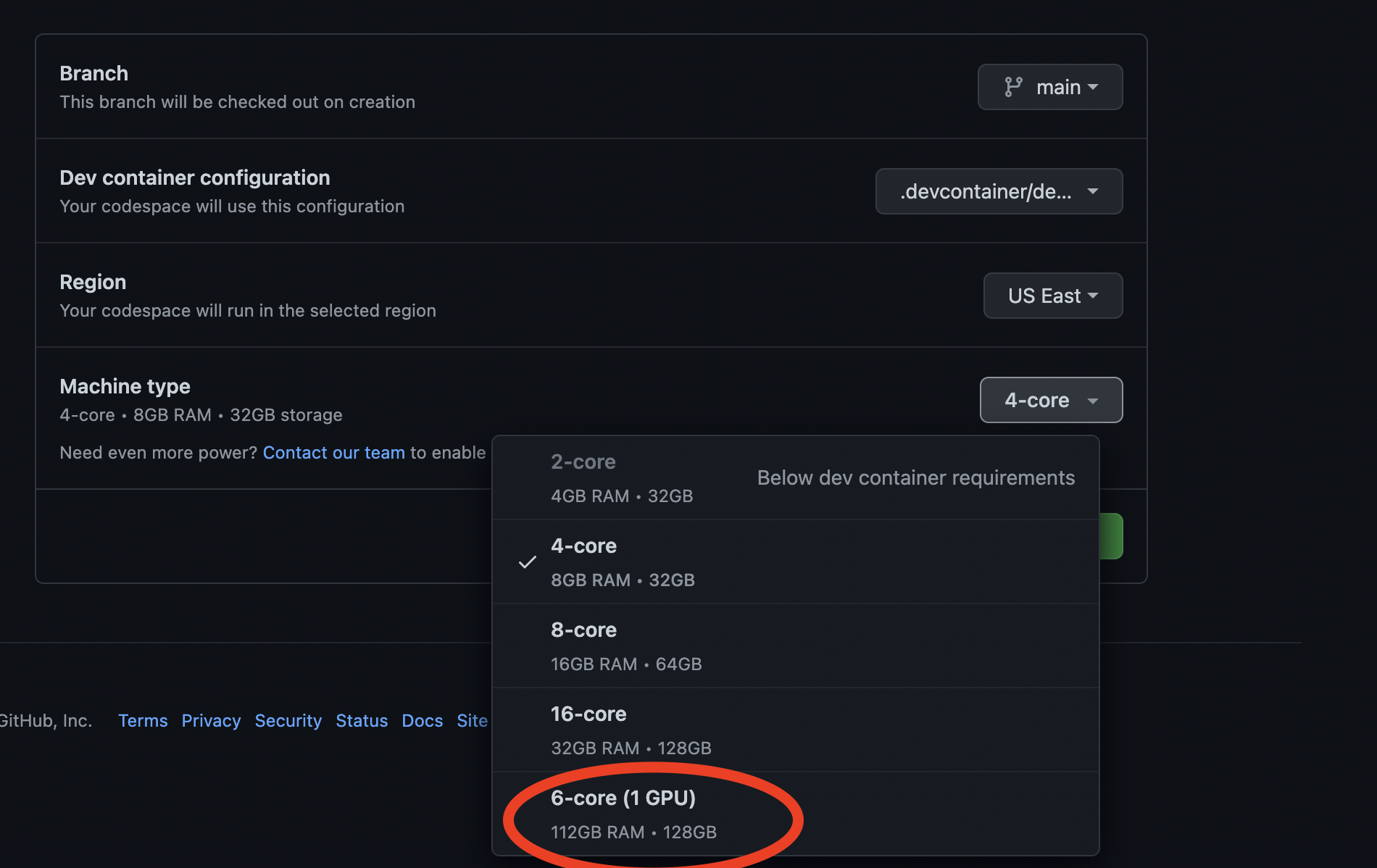 Step 6: In the notebooks folder, create a file called ai-generator.ipynb

You can name the file whatever you want, but it must end with the file extension “.ipynb” I also deleted the other files for my own sanity. However, you can leave those files if you want to experiment with them. 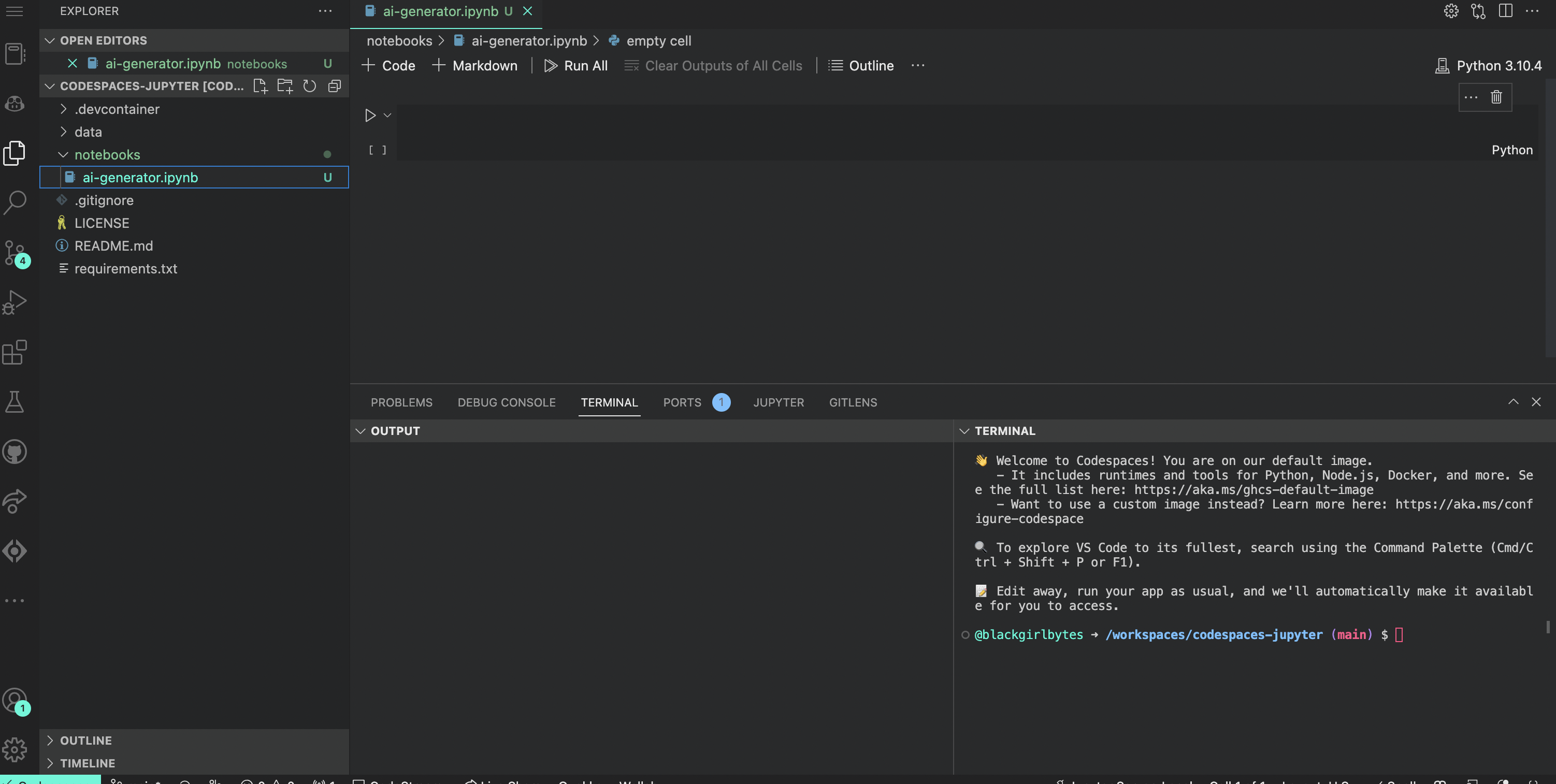 Step 7: Press the + Code button to add a cell in your notebook.

The cells are where you will add new lines of code! 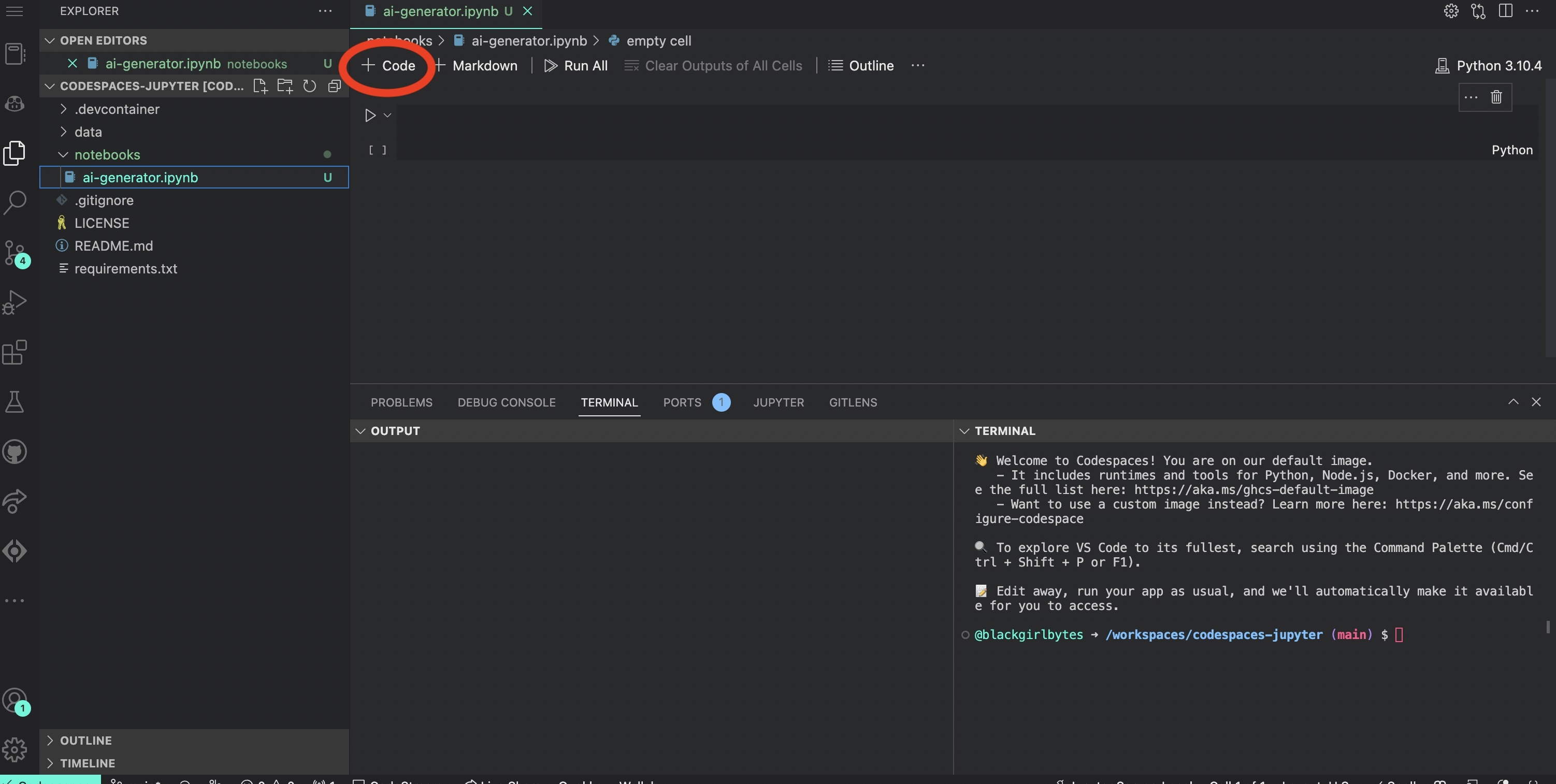 You can do this by pressing adding the following lines of code to your cells in your notebook:

Press the play button to run that line of code. Once successful, it should render a checkmark.

The final results for this step should resemble the image below:

In the next cell add these lines of code:

Press the Play button to run this line of code. If successful, you will see a checkmark. Take a look at the image below to verify your results:

Step 10: Dictate that you want to use the model in half-precision

Half-precision(fp16) will give sufficient performance and accuracy. Hugging face advises using this choice because it gives “the same results as full precision while being roughly twice as fast and requiring half the amount of GPU RAM”.

Add the following lines of code to your new cell:

Once you press the play button, your results should resemble the image below:

The code below should generate art for you! Update the prompt to generate an image of your choice.

Of course, don’t forget to run the code by pressing the Play button.

See the image it generated for me below! So cute! 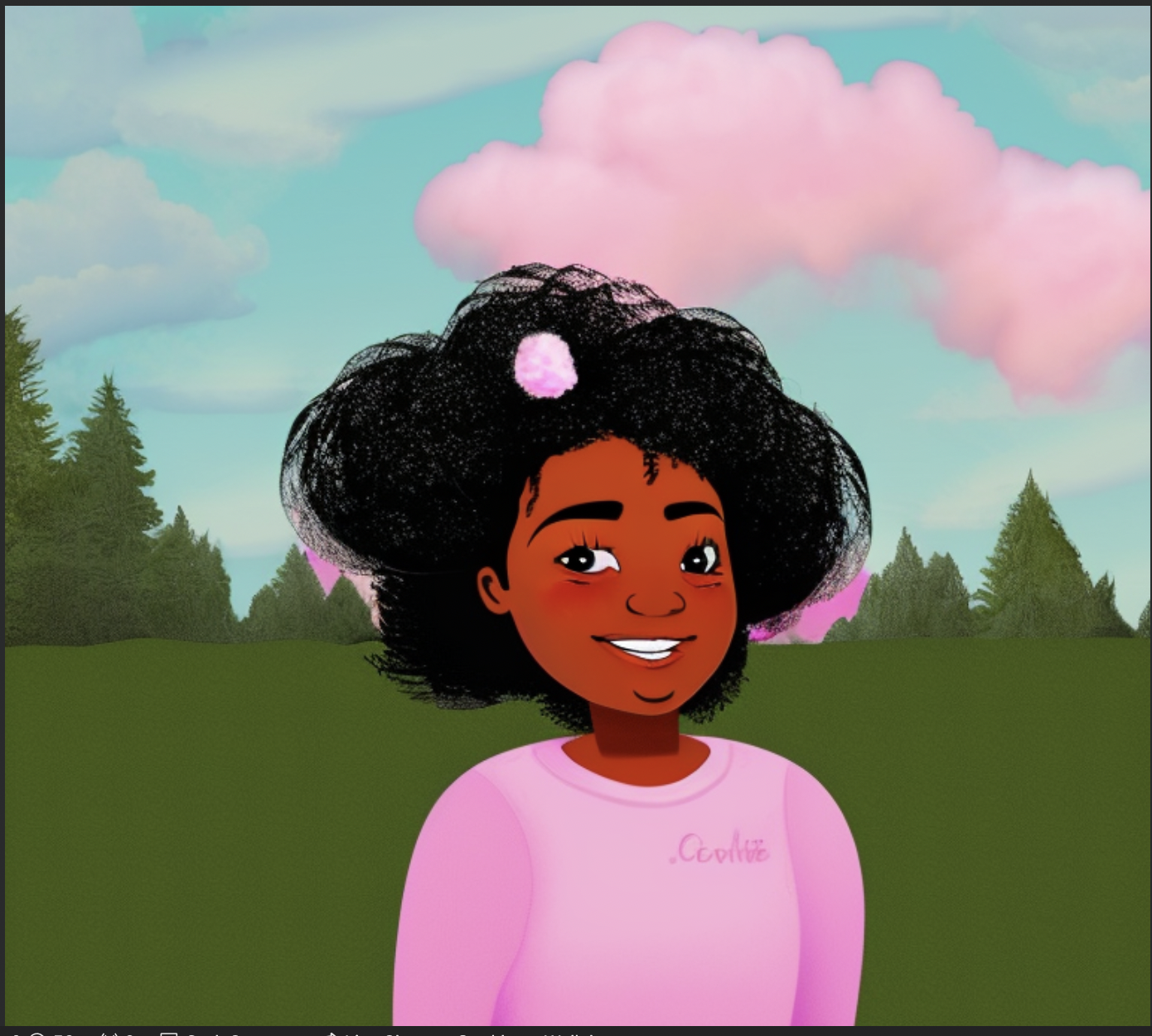 To toggle the output of each cell, press the letter “o” on your keyboard. I had a problem where I accidentally collapsed the output, and I wasn’t sure how to reopen it.

Step 12: Commit your changes to the repo and share your results below!

I would love to know what you created, so feel free to share it with the community.

You can find my repository here: https://github.com/galaxy-bytes/codespaces-jupyter

You can find my GitHub account here: https://github.com/blackgirlbytes, but I use the other account above for Codespaces demos.

Feel free to fork my repo and open it in a Codespace to generate your own AI art.